If you are considering using an EFB at some time in the future then this article will interest you. PC Tablets are the future and they will become the favourite personal computer of choice very soon. They are already finding their way onto the flight decks of airliners all over the world. But is the Apple IOS operating system and Apple's stand alone policy i.e having nothing to do with Microsoft suitable for aviation flight operations?

Not in my opinion.

The number of college students who say they own tablets has more than tripled since a survey taken last year, according to new poll results released today. The Pearson Foundation sponsored the second-annual survey, which asked 1,206 college students and 204 college-bound high-school seniors about their tablet ownership. The results suggest students increasingly prefer to use the devices for reading.

This year’s poll also found that the respondents preferred digital books over printed ones. It’s a reversal of last year’s results and goes against findings of other recent studies, which concluded that students tend to choose printed textbooks. The new survey found that nearly six in 10 students preferred digital books when reading for class, compared with one-third who said they preferred printed textbooks.

Harris Interactive, the same firm that conducted last year’s survey on behalf of the Pearson Foundation, conducted the poll in January. Figures for age, sex, household income and other factors were weighted to be representative of the U.S. population of college students.
Posted by Nigel Johnstone at 14:12 No comments:

The latest regarding the Flight Time Limitation Scheme from EASA OPS can be read here:
CRD to NPA 2010-14 (Part FTL)
Posted by Nigel Johnstone at 11:06 No comments:

European Emissions Trading Scheme. With So Many Nations Opposed to it It Is time the Scrap this Unwanted TAX


UK hands out first free aviation emission permits
Airlines with a registry account receive permits to help them comply with EU emissions trading rules
The UK has today begun issuing free carbon permits to airlines participating in the EU's Emissions Trading Scheme (ETS). The first EU Aviation Allowances (EUAAs) have been handed out to a number airlines who have fully completed the process for opening registry accounts, a statement issued by the Department of Energy and Climate Change (DECC) said.The department was unable to immediately confirm how many permits had been issued or to which operators. Airlines joined the EU ETS at the beginning of this year after Brussels saw off a legal challenge from US carriers. However, the threat remains that some non-EU airlines will not take part after the US Congress declared its opposition to the scheme, China reportedly banned its carriers from taking part, and Russian officials signalled they could do likewise.
A meeting in Moscow last month saw 26 countries, including the US, China, Russia and India, agree to a basket of countermeasures designed to challenge the EU's inclusion of airlines in the ETS. These countries contend the scheme contravenes international aviation treaties and will increase the cost burden on an industry already struggling with rising oil prices and falling passenger numbers. Analysts Thomson Reuters Point Carbon estimate compliance will cost airlines €505m in the first year, although this falls to €360m if the sector uses its full offset quota. Separate EU estimates have suggested the scheme will add no more than around €3 a ticket for long haul flights in and out of the bloc. Around 85 per cent of the permits airlines need in 2012, roughly 183 million EUAAs, will be issued for free, with the remainder being auctioned. DECC has said it expects to auction about seven million EUAAs each year, but will hand out around 18 per cent of the UK's total 57 million allocation to BA, while Virgin and easyJet are expected to receive more than three million EUAAs in 2012.

From Airbus flagship to Chinese pawn


The warning that Hong Kong Airlines (HKA) could scrap its 10 A380 orders in retaliation for European carbon tariffs opens an intriguing new front in the war being waged against the EU emissions trading scheme (ETS).
The threat – reported in a Chinese newspaper – might well prove to be bluster, but it does illustrate the wide political arsenal at the Chinese government’s disposal.
"We cannot do something which is against our country's interests," the newspaper quoted HKA president Yang Jianhong as saying.
In the United States, where opposition to ETS is fiercest, no such pressure can be brought to bear, though individual airlines could, of course, seek to indirectly influence the European Union through their Airbus order-books.
It would be surprising if any did so, however, as privately-run airlines operate on a commercial rather than political basis and, make no mistake, the case against the imposition of carbon trading on non-European carriers is a political rather than financial one.
This column has examined the economics of ETS before and will not repeat the exercise. Suffice to say, in its current guise the scheme will have no significant impact on ticket prices (as well as having scant effect on airline emissions).
The real concern is one of sovereignty and the projection of EU power outside its own borders. The complexity of international law in this area is only heightened by the tangled web of international and bi-lateral aviation treaties signed over the past 70 years or so.
Whatever the legal rights and wrongs of ETS, almost every nation outside Europe feels aggrieved by it, and others may follow the Chinese example, notably Russia.
No Russian carrier has ordered the A380 yet and, if he so desired, Vladimir Putin could easily ensure that situation continued.
Airbus’ superjumbo sits on 253 orders at present, either very close or very far from making a profit, depending on an estimated break-even sales total for the programme that has ranged from 250 to 420 units delivered.
Quite what pressure European politicians feel to see it reach profitability is another question.

Posted by Nigel Johnstone at 16:48 No comments:

The End of Silverjet 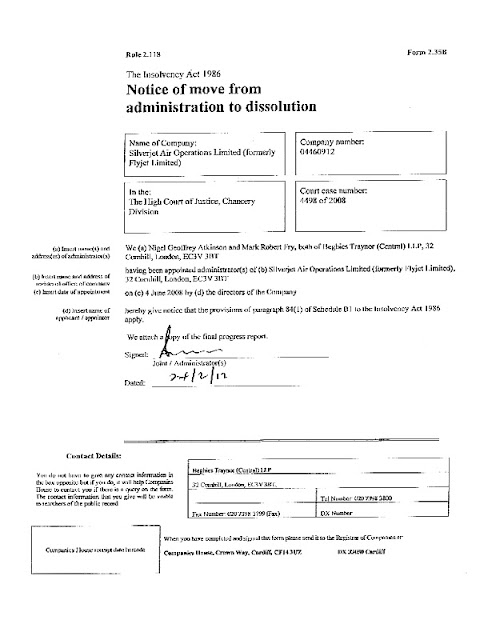 Silverjet moves from administration to dissolution.
Farewell it was fun whilst it lasted.
Posted by Nigel Johnstone at 11:35 No comments: